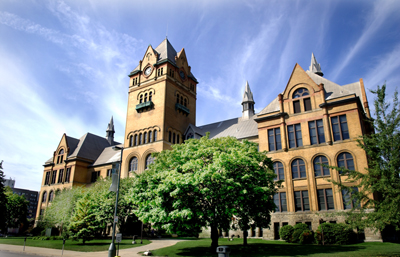 The Detroit Medical College, forerunner to the Wayne State University School of Medicine, was founded in August 1868 as one of many private enterprises started in the post-Civil War years in the boomtown of Detroit. In 1901, the first section of Urology within the medical college was organized under Frederick W. Robbins, MD. William E. Keane, MD became Professor and Chairman of the Department of Urology in 1920, and eventually became Dean of the Medical School. Urology training opportunities became available in 1928, at that time combined with the discipline of proctology. The American Board of Urology was formed in 1934. The board immediately recognized and approved the urology residency program and has maintained approval to the present time.

As Detroit grew so did the department, adding specialized faculty and further establishing urology as a surgical specialty. One key faculty addition was James M. Pierce, M.D., in 1958. Dr. Pierce was one of the true pioneers in urological surgery, having participated in the first renal transplant during his fellowship training. He brought national and international credibility to the department and its educational efforts. In 1963, Dr. Pierce was appointed to the Chairmanship of the Department of Urology at Wayne State University, a title which he held until his death in 1991.

The outstanding reputation of the Department of Urology continued to grow under the department's next chair, J. Edson Pontes, M.D., a pioneer in the diagnosis and surgical treatment of genitourinary malignancies. He established the department as a destination for quality urological care and recruited faculty to provide a wide breadth of surgical treatments for patients.

Coinciding with the growth of clinical service lines within the department was a focus on novel and innovative research. Partnering with the Karmanos Cancer Institute, new faculty additions were brought into the program to expand these endeavors. One such faculty member, Michael Cher, M.D., made an immediate impact and earned international acclaim for his ground-breaking work on mechanisms of bone metastasis in prostate cancer. Dr. Cher's development into a thought leader in the treatment of urologic malignancies and his dedication to resident education, made him an obvious choice to succeed Dr. Pontes as chairman of the Department of Urology at Wayne State University in 2007. Under Dr. Cher's guidance, the department has continued its mission to provide high quality urological care to patients and provide an educational experience for residents which prepares them to be outstanding and capable clinical urologists.

The department currently has 13 faculty, practicing in all areas of adult and pediatric urology. In addition, several Ph.D. scientists in the department are engaged in conducting interdisciplinary research in coordination with other departments. In addition, many affiliate private practice urologists at community hospitals in the Detroit metropolitan area provide clinical material and supervision to enhance the training of WSU urology residents.